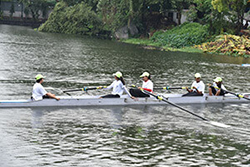 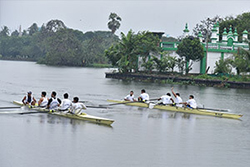 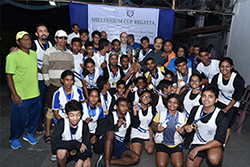 The origin of the annual Merchants Cup Regatta, as it exists today can be traced back to 1902, when the actual concept of this championship was formed. Later on, the present form of this regatta came into being in 1926 when the partners of Gillanders Arbuthnot & Co, started presenting the trophy to the winning team. This annual regatta for four,follows the rules and regulation of ARAE and the Merchants Cup is open to members of covenanted staff of any organization, company, firm, bank and any other houses with a commercial concern whether government or non-government ones.

In fact, nowadays, entries of combined crew who represent more than one company are acceptable under special circumstances at the discretion of CRC committee and several examples of such crews have been seen in the past few years. The only stipulation of this regatta is at least one member of the crew should be a member of CRC or even Lake Club and the entire crew must be connected with the concern they represent in the competition. It is customary to add a couple of other events to fill out the program each year such as the loser race for semi-finalists of Merchants Cup, sculling races for Panther Trophy and more. Originally, Merchants cup was initially known as ‘Class Fours’ that was competed among crews representing Merchants, Bankers, Insurance Companies and Government Services in 1902. Therefore, Merchants Cup has come a long way to achieve the huge popularity in recent times.

The popularity and success of PAGAL regatta throughout the last few years results into two more trophies that in themselves do not perhaps qualify for the classification among the Club Plate. However, these championships have become a part of trophy collections that members and their friends compete annually. For instance, F.B. Radford introduces a trophy called The Ladies Plate as a tribute to the late ‘Bert’. Later on, another event has been introduced in recent times for members of Inter-Club who represent different sports as well as social clubs in Calcutta.

Celebrating the madness in such a unique way, surely gets accolades. The motto of Pagal regatta is to enjoy the excitement of causal rowing, funfair along with Pagal night to get a break from the day-to-day routine of practice and regattas. Moreover, the favourable relaxing weather of Calcutta during Pagal regatta helps to bring back the nostalgia of expatriates’ who was completely devoted towards their responsibility and considered as the saviour of CRC. With exotic foods and drinks, the entire Pagal regatta seems complete and the feeling of madness, of this special event never fades from the mind. 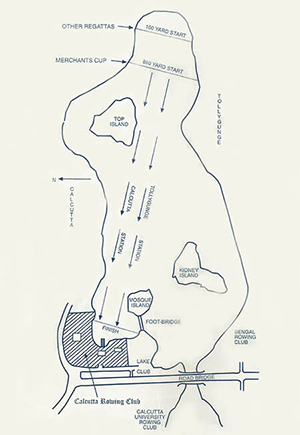 In the year 1929 an idea of an Eastern Henley, visualized by Mr. L.H. Macklin of Calcutta Rowing Club laid the foundation of the Amateur Rowing Association of the East after four years of sowing the seed i.e. in 1933. The first regatta was held at Poona in 1933. In 1935, the ARAE association won its first challenge trophy for Coaxed Four Oared race. The Pair Oars Trophy and the Sculling Trophy were also awarded to the association in the same year. In the year 1872, the Hoogly Cup was instituted as a Challenge Cup and later in 1956 it was incorporated into ARAE Regatta. It consisted of 6 trophies with 2 rounds each- the Willingdon trophy, Venables bowl, Macklin sculls, losers’ fours, losers’ pairs and losers’ sculls.

The Amateur Rowing Association of the East was being britisher’s inheritance when the leading rowing clubs in the East united to encourage and support the spirited rowing between themselves. The organizers, who initiated the ARAE were –The Calcutta Rowing Club, Bombay Gymkhana Club, Madras Boat Club, Karachi Boat Club, Royal Connaught Boat Club and Rangoon Boat Club. Presently, ARAE has 17 or more associate clubs across Asia.

A rowing championship is planned by the ARAE annually hosted by different clubs each year. The rowers compete to achieve victory and receive the esteemed rowing trophies, which include the women’s Adyar Trophy and the men’s Hoogly Cup for overall championship winners.

Head of the Lake

In 1933, the Amateur Rowing Association of East was formed as well as the journey of annual rowing competition called Head of the Lake Regatta began against the newly formed Lake Club. The centenary year of our club was celebrated in a magnificent manner and the joy doubled with the win of the Willingdon Trophy in the silver jubilee regatta of A.R.A.E. While hosting the A.R.A.E regatta in 1961, CRC again won the Willingdon Trophy, Hooghly Cup and Venables Bowl. Thereafter, a massive change has taken place in the membership of the club along with the colonials’ ratio falling rapidly. However, the improvement part of the club continued by adding oars, boats, honourwinnings.

Throughout the long journey of the Calcutta Rowing Club, it has been fortunate enough to win accolades from India as well as abroad. Therefore, gifts from abroad kept pouring in as a part of the donation and the reputation is still intact with complete dedication of members.